This is the speech I gave in my home town of Scottsdale, just before Christmas. Thanks to all those who came along. I really appreciate your support. Melanie. 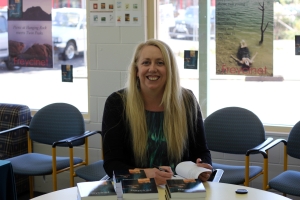 “Perhaps you have to leave a place to really appreciate it. But I hope Freycinet, with its emotive, colour-filled and dramatic descriptions, its inherent darkness and gothic allusions, its painterly portrait of Tasmania, sparks some resonance with you.”

“Welcome everyone and thank you to the Scottsdale Library for hosting me today.

It’s lovely and seems fitting to be here today in Victoria Street talking about my book. We lived at 20 Victoria Street for many years, with Paul Farrell next door and Janelle Langley down the road, and directly opposite was Ruth Unwin. I initially chose the name Ruth for one of my characters because of Ruth Unwin. But that was when the character was sweet and innocent and blonde. Later the character became dark and nasty and decidedly witchy, and obviously not at all like Ruth Unwin.

One of the things that I loved in my childhood was the library. I had a special arrangement with Mrs Smith so that I could take out as many books as I liked. I read some ridiculous amount of books for the MS read-a-thon. And I always thought I would write a book.

Ever since I first found out that a person could actually write a book. It wasn’t until Diggity Gresham at school one day asked if I liked The Lion, The Witch and The Wardrobe, and I said ‘yes, of course.’ To which he replied that it had been written by his step-grandfather. I was sure that couldn’t be true. But Mum and Dad confirmed it. C.S. Lewis’ family lived in Ringarooma next to my uncle’s pig farm! This was amazing to me because prior to this books came from England. They were written in England, usually by men, and seemingly hundreds of years ago.

Then, when I was a teenager, I came across a book by Tasmanian author Carmel Bird. The book, The Bluebird Café, was set in, of all places, Launceston! Her characters sat and drank milkshakes at Pierre’s much as I was doing at the time while at Matric.

My plan to be an author seemed to be slowly becoming more possible.

The author, Melanie Calvert, with her parents Ted and Phyllis Calvert.

So I went to see a student advisor, to see what I needed to study to be an author. “No,” they said, “with your work experience you should do a business degree. You won’t get into Uni otherwise.” “It’s no good doing Literature, it won’t lead to anything. Everyone wants to be a writer, but very few people actually become one.” “You could do Journalism, but you can’t do Journalism in Tasmania.”

But, somewhat amazingly, I did get into Uni, at Deakin University in Victoria, where I studied Literature, Journalism, and Performing Arts. I did an honours degree and then a master’s degree in Literature.

But I still hadn’t written a book.

Then, much as in my novel, my fiancé Brad and I were at Freycinet. We were standing on the balcony, with fairy lights glittering in the trees, when the soundtrack from Twin Peaks began to play. And I said, “This would be a great place to set a novel.”

It was always going to be like Picnic at Hanging Rock, merely because of the mammoth physical presence of Freycinet’s Hazards mountains. And there would be one or more young women who disappeared into the wilderness. The true life mysteries of Nancy Grunwaldt’s disappearance and the murder of Victoria Cafasso only reinforced the idea of the haunting Hazards, the perilous landscape, and labyrinth-like forests.

And so we have Freycinet, the novel, a psychological murder mystery in which the main character, Ginny O’Byrne, finds herself pitted against the eerie, ever-present Hazards, experiencing gory, clairvoyant visions of two missing women, surrounded by a cast of extremely suspicious and untrustworthy men, and all of this in an environment that seems intent on consuming Ginny into itself. Ginny joins the search and rescue mission to try to find the two women, but can she find them without placing her own life in danger?

In the novel, I wrote about things that I have some knowledge of. So there is a policeman because all through my life I have had the presence of a policeman father. There is ballet because when I was 10 my sister Cindy was in the Tasmanian Ballet Company and Mum and I sometimes travelled with the company because Cindy was only 17 at the time. So I was ‘subjected’ to a lot of ballet performances. And my novel has the Tasmanian bush because I’ve spent a lot of time travelling to places like Cradle Mountain, wondering at the Chinese graves at the Moorina cemetery, exploring on lonely farms at Ringarooma, and rolling down sand dunes at Tomahawk. All these places impacted strongly on me, and so it strikes a resonating note in my heart when I see the familiar colour combination of blue and green.

Perhaps you have to leave a place to really appreciate it. But I hope Freycinet, with its emotive, colour-filled and dramatic descriptions, its inherent darkness and gothic allusions, its painterly portrait of Tasmania, sparks some resonance with you. Because my novel Freycinet was born of this town, this landscape, this state, and is in many ways its child and product.